The Language of Development 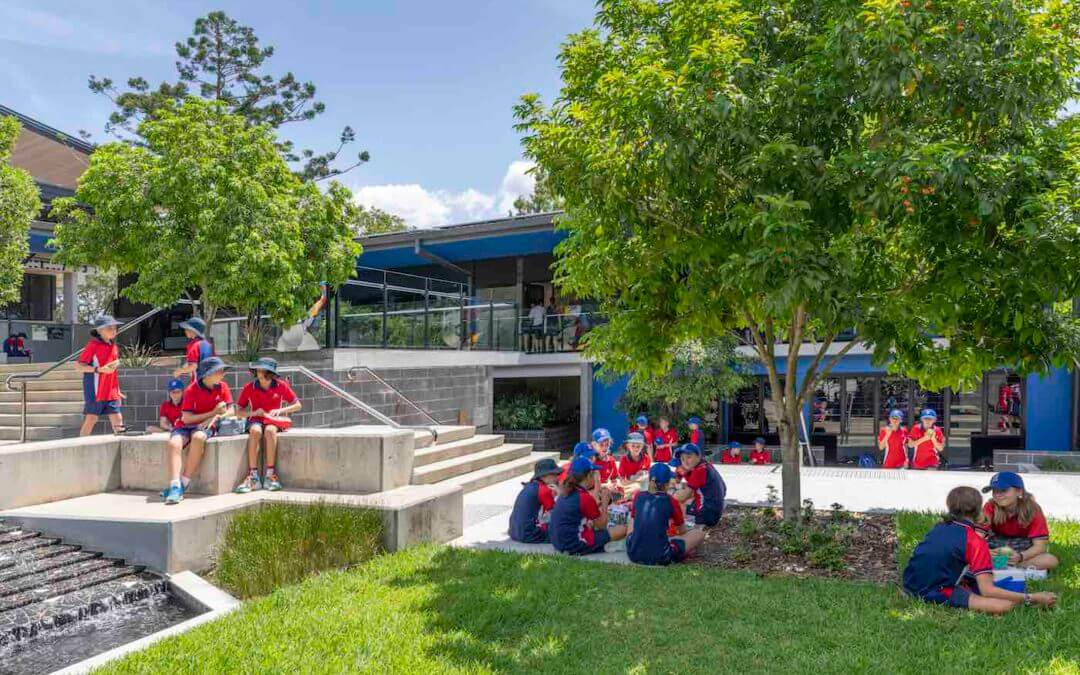 Hillbrook always has, and always will, be much more than its built environment, however the buildings and grounds are important and must blend intrinsically with what is at the heart of Hillbrook.

There has been a carefully considered language at work during every single piece of planning and development: “Dare to Dream”, “Informality with Dignity” and “In Balance We Grow” underpin this, along with the all encompassing statement “There’s a place for me here”.

Foundation parent Peter Jackson, and member of the first Buildings and Grounds Committee, sums up the early days like this “There was a great deal of enthusiasm in those early days and an enormous diversity of skills among the foundation parents. Everyone, parents, teachers and students got involved in cleaning up debris and cobwebs in the old buildings and grounds to prepare everything for the opening”, Peter said.

“Thankfully everyone had the foresight to put the brakes on and make do. The concept of the school had been carefully thought through by the founders, and the parents felt it was important to be just as careful in planning the buildings and the grounds, and to work slowly but surely towards making those plans a reality.”

The years flew by and new buildings sprung from the grounds, including the Administration Block in 1992. In 2003 the Performing Arts Centre was completed. This was a major project with six years of careful consideration being given to ensuring this was an exciting and inspiring learning space as much as a performance facility – a venue used only on special occasions was never going to be an option. Hillbrook dared to be different.

The next major development project was the Chapel, which at the time was the most challenging built environment brief in the history of Hillbrook. “Create a structure worthy of housing the heart and soul of a unique school community”, they said. With this in mind Brand and Slater Architects (now BSPN) worked with the school and created exactly that. Again, Hillbrook dared to be different.

New developments continued over the years including B Block, the custom built Home Economics rooms and the redevelopment of the Library.

Fast forward to 2019 and Hillbrook has undertaken its biggest project yet. The entire front of the school has been redesigned to accommodate a new Administration Building, state of the art Science and English classrooms, break out spaces for students, a commercial kitchen and Cafe, Uniform Shop, underground car parking and major landscaping to soften the front of the school. The forecourt area will be double the previous size providing many more shady, green spaces for students.

Again BSPN have worked with Hillbrook on this project to ensure this development speaks the same language as the rest of the school. This project is much more visible than any other development undertaken due to its location at the front of the school and this required some very careful considerations.

Some of those considerations were articulated by Board Member, Deborah Enright:

The new Administration building has been operational since October 2019 and the new English, Science, Cafeteria/Uniform Shop and new student outdoor spaces are set to open early in 2020.

Blending the old with the new is always a consideration and we have brought elements of the old Administration Building into the new one with the lead-light windows and silky oak entrance doors calling the new building home now. In addition the rustic timber Hillbrook Anglican School sign has been lovingly restored by some Year 11 students and is now re-installed at the front of the school.

We believe our new buildings and outdoor spaces, whilst vastly different to where we began in 1987, still speak the same language as they always have. This can be summed up by the words of Hillbrook’s co-founder Norm Hunter on a recent tour.

“Rae & I were delighted in early December 2019 to be invited to inspect the major building work that has taken place during year. Our main impression was how effectively the design of the administration building has captured the spirit of architecture that characterised our earlier buildings, especially the concept of “informality with dignity”. The use of natural light throughout is beautiful, & the depth of thought that has gone into student and staff areas is very impressive and I’m sure they’ll appreciate it. It’s a place that reaches out in welcome to people, including those coming to it for the first time. It made me proud to have been part of the Hillbrook story as it continues to evolve.”