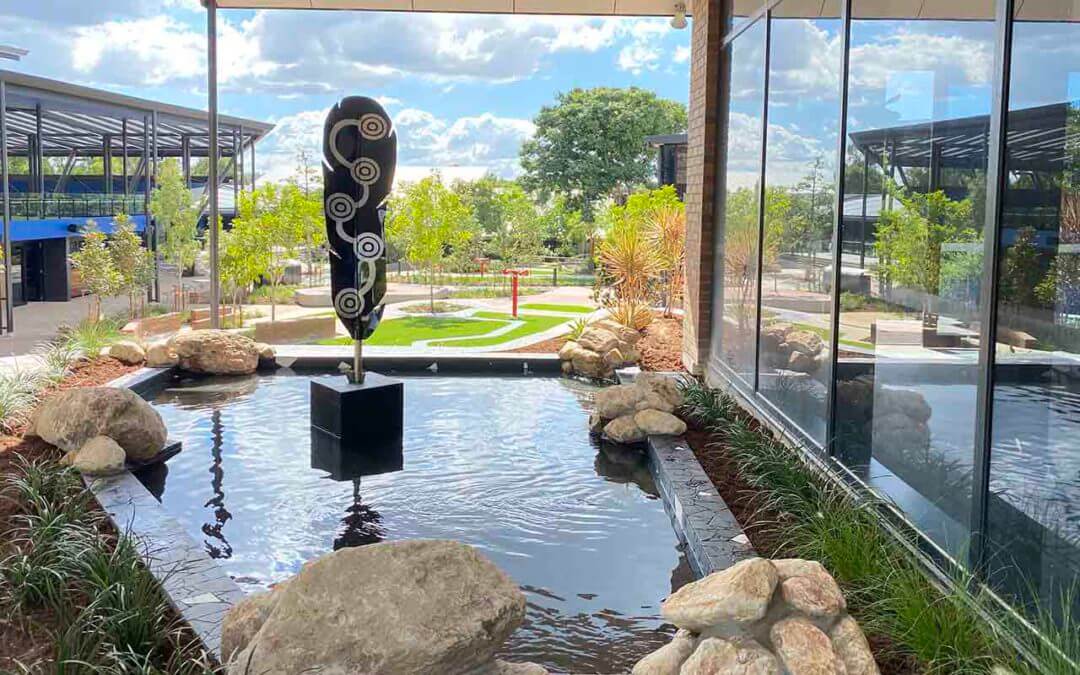 The little black and white birds seem to be the messengers

This sculpture, created by Debbie Taylor Worley (a Gamillaraay woman), is dedicated to the memory of Laurie Nilsen, 1953 – 2020. Laurie is a Mandandanji man.

Laurie Nilsen was the inspiration for this sculpture as well as a mentor to Debbie.

The black feather represents the Willy Wagtail, the favourite bird of artist Laurie Nilsen. The concentric circles are a symbol of a campsite, which in Gamillaraay is called Walaay. A tribal group could be divided into smaller walaay, each with their own campfire. In this instance, the 5 walaay represent the 5 Houses of Hillbrook. Although separated, the students are actually a united, connected whole.

He loved telling stories and he loved birds, and they ultimately played a significant role in his life.

Laurie was renowned for his Emu artworks. The emu was, after all, his totem, and he’d watched many of them die, caught in barbed-wire fences. They became a political environmental statement for him. But the bird that really captured his heart was the Willy wagtail. He saw them as messenger birds, the bringer of news and warnings, of good and bad tidings.

Uncle Laurie shared this story four weeks before he passed away:

“I always like talking about my grandfather, cos he had this thing with birds…he talked more to birds than he talked to people. Mum also had this thing with birds and I’ve got it too. You’ve probably seen that little willy wagtail that follows me around at uni. It got close to me. The little black and white birds seem to be the messengers. One let me know that mum was dying. We look at the willy wagtail as the bringer of good news, and letting us know that someone was coming.”

About the artist, Debbie Taylor Worley

Debbie is Gamillaraay woman, originally from north west NSW and now residing on the Tweed Coast. After the birth of her daughters she went on a quest to reconnect to her heritage, resulting in studying, at a mature age, at Griffith University’s College of Art. Debbie graduated in 2008 with a Bachelor of Contemporary Australian Indigenous Art. Since then she’s worked as an artist and an educator. She’s been in numerous group shows, has illustrated four children’s books, conducted many workshops and created public and community artwork.